In 1981, the SAE (Society of Automotive Engineers) launched Formula SAE as an American university competition. In this competition, students work in teams to design and build single-seater racing cars that are judged both on their dynamic motorsport attributes and on their economic and technical aspects. In 1998, Formula Student was founded in Great Britain based on this model, which was expanded to more and more international race tracks in the following years. There are now a large number of official events worldwide, in which more than 500 teams from all over the world participate. The events challenge the students through a variety of disciplines.

In Formula Student, disciplines are divided into dynamic and static disciplines: 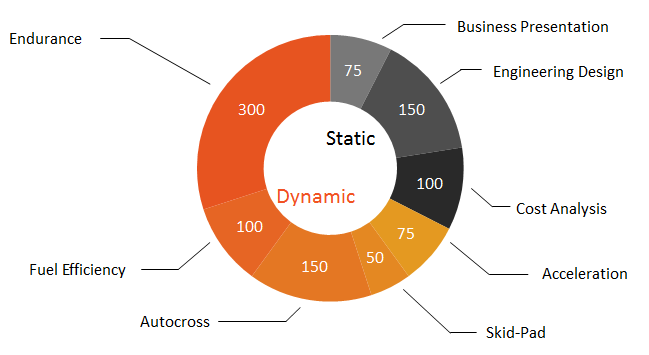 The focus here is on the performance of the vehicle and the skill of the driver. In various competitions, the vehicle has to prove itself against other teams on the track.

A course in the form of a horizontal figure eight, in which each circular ring must be circled twice in succession. The second lap is measured. The aim of this discipline is to achieve the highest possible lateral acceleration.

Staked handling course of about 1 km length with straights, bends and chicanes. The placing determines the starting order in the Endurance.

The supreme discipline: The vehicle has to prove itself over a distance of 22 km, which is similar to the track layout of the Auto Cross, but allows higher speeds. After 11 km, there is a driver change. In this discipline, the vehicle with all its components and the drivers are pushed to their performance limits.

The Fuel Efficiency discipline evaluates the efficiency of combustion engines. The fuel consumption required by each team during the Endurance is measured. The team with the lowest consumption receives the highest score.

In the static disciplines, the teams present the various aspects of their vehicle to the judges in discussions and presentations.

During the Design Report, the technical directors present concepts developed in their area to an international jury of technical experts from the automotive industry and motorsport. Individual concepts are discussed and critically scrutinised. The teams with a high level of understanding and technology in their vehicles come out on top here.

The Cost Report is the presentation of cost efficiency and understanding of this, as well as selection of specific manufacturing processes in front of jurors. This includes listing every single component of the car and its manufacturing costs. In addition, the "Real Case", a previously set, specific task to reduce costs.

A 15-minute presentation of a fictitious business model is presented to the judges. The model should convince potential investors to finance the presented prototype within a business concept in a small series.

For example the Formula Student events take place on the following race tracks: